The increasing interest in natural sources of bioactive substances, with not only essential compounds for nutrition, but also with pharmaceuticals potentials has lead researchers to study different marine organisms1, 2 Sea cucumbers are marine invertebrates, belonging to the class Holothuroidea, habitually found in the benthic areas and deep seas across the world.

They have been considered by the traditional medicine as tonic foods in Asia and Middle East. Moreover, they have been attributed with a wide range of biological effects, including antioxidant, antimicrobial, antithrombotic, anticoagulant, healing, antioxidant, anti-hypertension, cytostatic and anti-inflammatory3. The therapeutic properties have been attributed to chemical compounds extracted from the sea cucumber´s body wall. Among molecules described in different sea cucumber species include: triterpene glycosides (saponins), chondroitin sulfates, glycosaminoglycan (GAGs), sulfated polysaccharides, sterols (glycosides and sulfates), phenolics, cerebrosides, lectins, peptides, glycoproteins, glycosphingolipids and essential fatty acids3, 4.

There are several species from the genera Apostichopus, Holothuria, and Cucumaria that have been widely studied for their components and biological action. However, others species from the genera Actinopyga, Bohadschia, Parastichopus and Isostichopus remain poorly characterized, despite their high commercial value and potential in production systems. In this context, IMDEA Food Institute researchers in collaboration with researchers from the Department of Recursos del Mar from the “Centro de Investigación y Estudios Avanzado” (Cinvestav) “Unidad de Mérida” (Mérida, Yucatán, Mexico) have studied the beneficial effects –on growth and body lipid profile in young rats– of different meals containing Isostichopus badionotus from Yucatan Peninsula.

Their results reported that sea cucumber consumption modulate gene expression of key genes involved in cholesterol and lipid metabolism in the liver. Indeed, diets containing I. badionotus repressed the induction of key genes associated with dyslipidemia exerted by cholesterol supplementation. Their findings suggested that consumption of I. badionotus from the Yucatán Peninsula is beneficial for dyslipidemia, and showed that the biological effect is clearly dependent on the preparation method5. Dyslipidemia is only part of the story, as other biological functions are currently being evaluated by the researchers. As uncontrolled inflammatory response is a major driver of many modern human chronic diseases, the research team is now focusing on possible anti-inflammatory effects of molecules found in this type of marine organism6 .

Some previous studies have reported the anti-inflammatory effects of other species of this genera including Apostichopus 7 , Stichopus 8 , Holothuria 9, 10, Cucumaria11, or Parastichopus 9. However, there is scarce information for Isostichopus badionotus. Their preliminary results testing different components from body wall extracts suggest that fucosylated chondroitin sulphates from Isostichopues badionotus of Yucatán peninsula (unpublished data) exert strong in vivo anti-inflammatory properties by modulating key pathways related to inflammation. Understanding the molecular mechanisms exerted by fucosylated chondroitin sulphates isolated from sea cucumber from the Yucatan Peninsula will open up novel opportunities to combat our modern human disease related to inflammation. 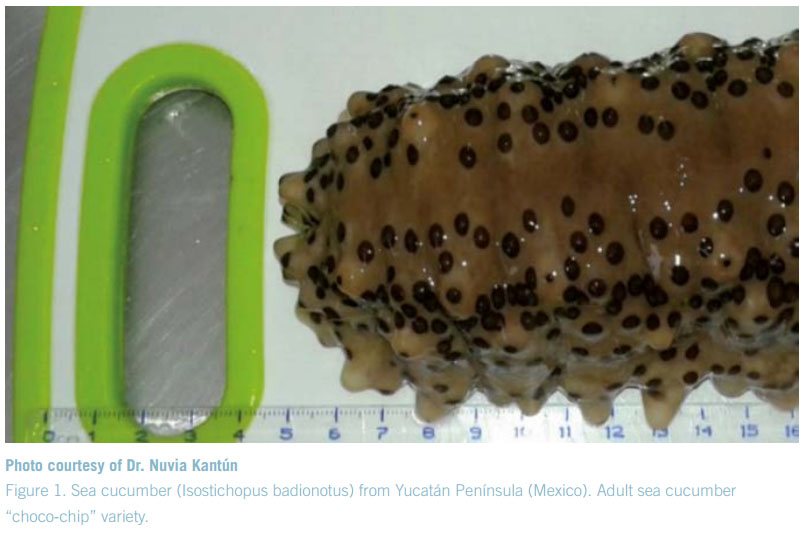 1. Jungbauer, A. and S. Medjakovic, Anti-inflammatory properties of culinary herbs and spices that ameliorate the effects of metabolic syndrome. Maturitas, 2012. 71(3): p. 227-39.

4. Bahrami, Y. and C.M. Franco, Acetylated Triterpene Glycosides and Their Biological Activity from Holothuroidea Reported in the Past Six Decades. Mar Drugs, 2016. 14(8).